Following an appointment that was made for today by Venezuelan government and opposition, Venezuelans met today in Caracas and also in many cities around the world. 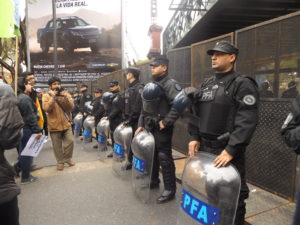 Due to the mass of people, Argentinean Federal Police divided both sides that started to insult each other. Leftist activists attacked the Venezuelan opposition.

Venezuelan opposition party MUD demonstrated today in Caracas in a movement called “Toma de Caracas”, where they ask to their electoral authority to start the process to revoke Nicolas Maduro’s regime. They also invited to Venezuelan’s around the world to demonstrate in their local embassies and ask for the same.